We were united by the web across time and space
we had the pleasure of your company, your thoughts, your generosity,
You lived for decorum
even in difference, in disagreement,
in jest,
the world is duller without you,
no one can take your place in our hearts,
no one can wear your colours, we bid you adieu,
may your life continue to inspire others, may your candle shine in the darkness, may we meet again someday,
Adieu Chivaneze.

This tribute marks the passing away of a friend, brother, son, follower @chivaneze

May we learn to live for eternity.

Some people say the Agbada only shook Lekki but I disagree.

Last weekend in a star-studded. celebrity-flooded wedding two Nollwood stars Banky W and Adesuwa tied the knot in a beautiful traditional marriage ceremony. Fans and friends were delighted and social media was filled with warm wishes for the two. One of the guests to the wedding was Ebuka Obi-Uchendo a writer, TV host, lawyer and compère; and he was the guest who wore The Agbada. Since then the Agbada has been called many names including AgbadaX, Ebuka’s Agbada and Agbada-Kimono. But more importantly it has brought a maelstrom of activity to both social and traditional media.

At first glance, it is hard to see what the rave is about, the garment was quite simple, not a glimmer of bling in sight, no flamboyant wings, no multicolour layers, no sequins or beads; but a combination of factors made this garment the talk of the world.

First of all, the AgbadaX was made from an exquisite fabric rumoured to have cost at least fifty thousand naira. It was a luxurious purple colour, reminiscent of royalty. To create a garment like that, the same fabric or something very close is necessary. Many wannabee owners of the AgbadaX are already trying to recreate the look without this vital component, the outcome? Disasters.

Secondly the AgbadaX was made by none other than the renowned fashion designer and trendsetter Ugo Monye. Sources say the AgbadaX was made for 280 thousand naira. Only. They also say Ugo has been making clothes for the very rich for close to two decades. It is clear that he brought his wealth of talent and experience into crafting this signature piece, anyone expecting similar results from a roadside tailor has booked a date with disappointment. 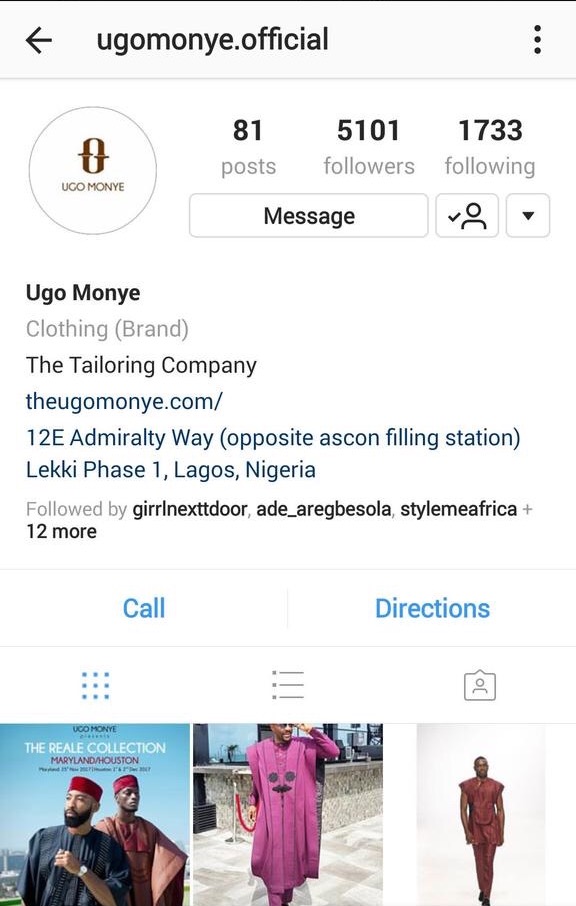 Thirdly, the garment was worn by Ebuka, a tall, dark, fit, handsome man with celebrity status and over 200 thousand Twitter followers. In a word, carriage, Ebuka brought carriage to the AgbadaX and transformed the garment from being just another asoebi to a true work of art.

And of course there were other factors, the excellent photograph by the yet unknown photographer who got just the right shit at just the right angle and  whose work has since gone viral, the dry cleaner( some one said the ironing was done in Malaysia 😂), and the Twitter influencers, On-Air-Personalities, Vloggers and Bloggers who have kept the hype raging for days. So many different factors coming together to create an effect that will not be duplicated soon.

In the wake of this iconic garment, there have sprung a flurry of responses, actions and reactions:

A certain Yinka, a tailor has promised his client he can reproduce the garment. And bets are already being cast about the outcome. 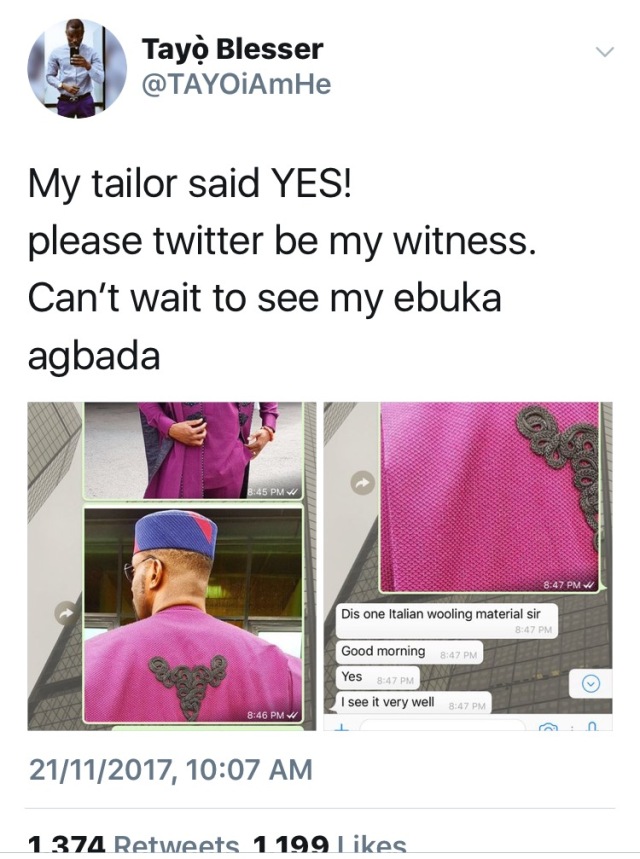 A colleague of Ugo Monye’s, Seyi Vodi has advised against any form of copying or reproduction of the iconic piece calling it a “mind blowing piece of art.” 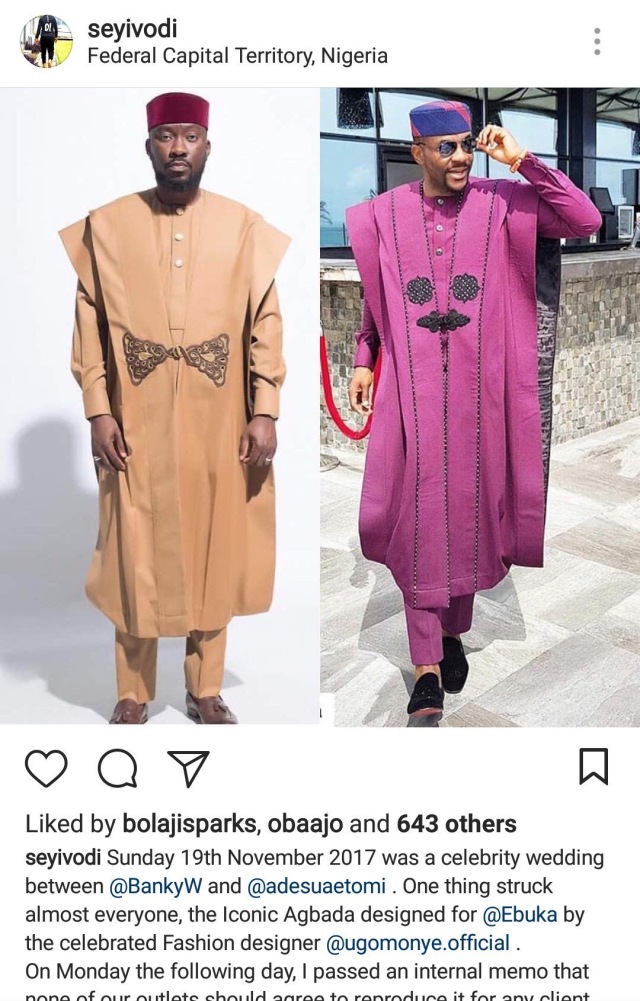 A feminist blogger has accused Ebuka of employing male privilege, trying to outshine the groom and some other patriarchy related offences. 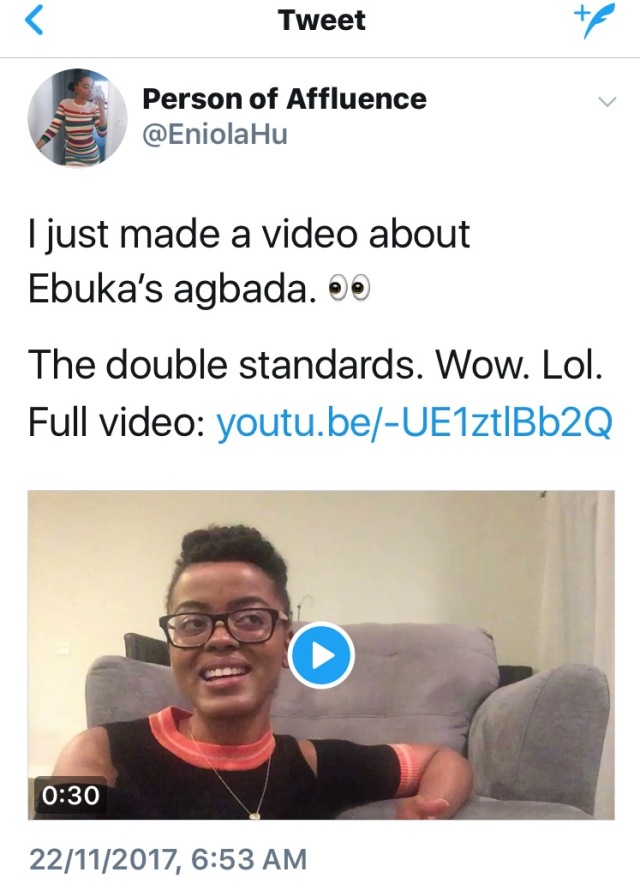 A failed attempt at recreating the garment has already been posted and was thoroughly lambasted on Twitter. 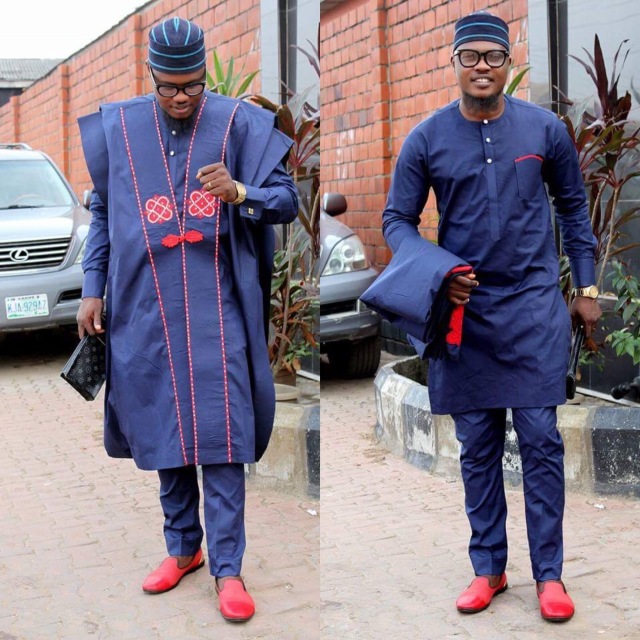 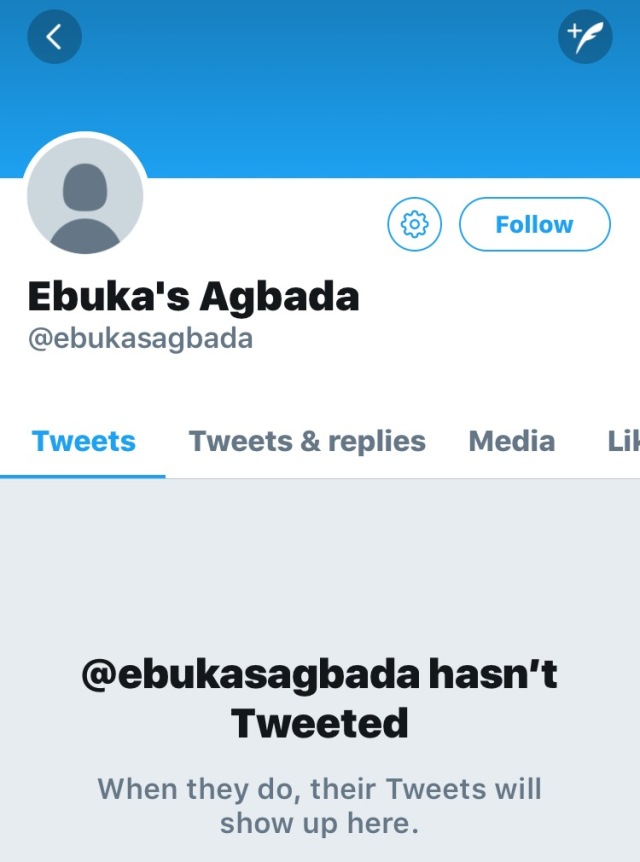 One can’t help but wonder what will happen next on the AgbadaX Diary but one thing is for sure, this is one Agbada that won’t be forgotten in a while.

–
I wanted us to make it work but 30 tweets a minute was out of my league.
–
–
You spammed my TL . Do you have to cc everyone from the Pope to Lucifer? For a 200 word rant? Seriously?

–
–
We rubbed each other the wrong way. When I tweeted ‘Guys Rule’, you had to say ‘Girls Rock’. When I opined– ‘The patient dog got the meat’, you remembered ‘the early bird got the fruit’. it was inevitable.
–
–
How can you tweet nudes by 10 am? Are you the only applicant in the world? Abeg.
–
–
Two months. No tweet. No retweet. No sign. Sorry love, Twitter is done real time.
–
–
A Direct Message in the first two minutes, asking me to buy something. Say what?
–
–
You wouldn’t follow back, even though you followed just 30 people. C’mon man.

How could you say Michelle Obama wasn’t fine? Did your glasses break or someone stole your eyes?
–
–
It was high maintenance. Can’t you exist for 24 hours without cursing Mr President? Can’t you see the man has it rough already? What makes you think you’d do better? Seeing that you are a single man who can’t even lead a wife and a kid?
–
–
It was a matter of principle. The good book said “cut off anything that would keep you from heaven”. Reading your R-rated tweets, threatened my mansion.
–
–
You stole my tweet.
–
–
I was just being kind, doing to you as you had done.
–
–
Your handle. Jesus didn’t rise for me to follow Lucifer’s Boo, Maneaterrrr and DevilDame, you make this thing hard.
–
–
I have a bible. The least you could do is to give me your testimony or translation. Sorry, there’s only so much TL room.
–
–
You are a ghost. You hover on my follower count. No Retweets , no mentions, no thing-am-abouts. No. That wasn’t the plan.
–
–
Your avi is eww.
–
–
Your unfollower tool said 200 people did it. I felt left out.
–
–
Twitter for Blackberry won’t give me a mute button. So I did what I did.
–
–
I am sorry. It is not you. It is me.
I un-followed you but please, don’t un-follow me.
*

Why do you unfollow people? Share with us in the comments. 🙂 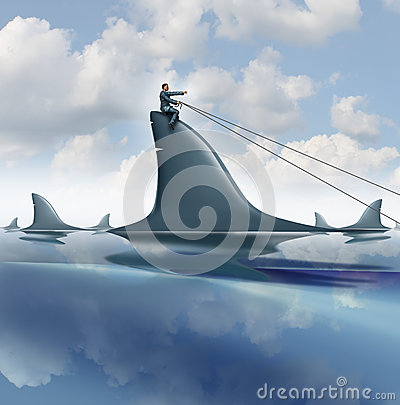 Some things are shaky,
Some things are sure,
These I have found true:
In this wacky world’s tour,
Fairness is a myth,
Justice is a heist,
Life is unfair?
Deal with it!
There will always be someone with more,
And someone with less,
Your best defence is to give
It your best,
Don’t worry which way your cup
Is going,
Be grateful you have a cup
And something in it.
Be the you,
God had in mind,
When he sent you to these climes,
Light a candle,
Don’t be a stumbling block to
The blind.
Give your heart out, when you are sure,
Live your best life,
Bloom right there where you are
Planted.
Be that one true authentic you,
That’s the most
And the least you can do.

Someone pines for what you have.
Be grateful.

Someone has what you pine for.
Be humble.

If you can’t sing, clap for singers.

Be the change you want to see.

Investigate people before you do business with them.

Be courteous. People want to be around pleasant people.

Teach people how to treat you.

Be happy in your skin.

Chewing ice can crack your teeth.

Everything has a disadvantage and an advantage.

Work with your advantages.

Note those that celebrate you and reciprocate as much as you can.

Write your yearly,monthly and 5 year goals.

Let people that want to leave you go.

Learn something new every day or week or month.

Guard your eyes and ears.

Do to others what you want done to you.

Ask yourself, if everyone were to do this, would the world be a better place?

What a dull world it would be if every flower were a rose,
What a boring sky if every bird, an eagle,
How hungry if every thing was gold,
It is the darkness that gives value to light,
The soft that show the strong,
A hare is faster than a tortoise,
Can it run against a lightening bolt,
In many shades of variance,
We lend colour to this blue marble ball,
Not all strong,
Not all brave,
Not all swift,
Not all rich,
But all important to the Grand Scheme.
May I find my place and be the best I can be.